Lock Keyway Explained – The keyway of a lock is simply the shape of the hole that the key goes into when you insert it into the lock  Locks are available in many different keyways. But What really is a Keyway? It is the broaching, or milling of the plug (the center part of the cylinder where the key goes in )

Why is the keyway important? Well, Sometimes you may have a replacement lock to be installed , but you  want to set it up on an existing key for a building. Or maybe you have an existing master key system that you want to integrate the new lock on.

In any case, the keyway of the lock will determine what key fits into itself.   example Pdq Locks are available in many different keyways and listed on the product listing pages for each lock. This allows the user to select any pdq lock , THEN select the keyway that is compatible with the existing keys (which the lock can later be keyed to) The diagrams below will show you the different keyways  that are available for Pdq Locks Sargt Lox, Corbin locks, etc. 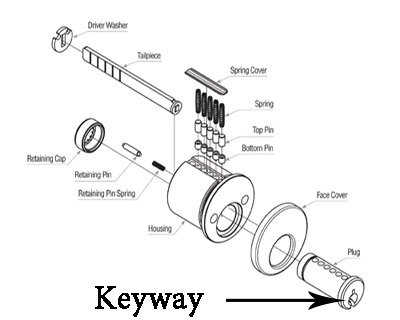 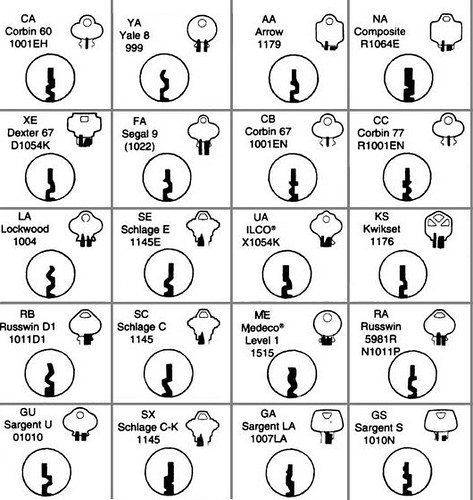 The rear of the rim cylinder has a tailpiece that is connected to the cylinder on one end and usually actuates some sort of a lock. It may be an Exit Device or it could be a Jimmy proof deadbolt or a rim lock. They are sometimes even used in night depositories, or unusual applications, since they’re so universal. If the tailpiece is too long, it can be cut and shortened in length.

The cylinder is held in from the back by screws which not only hold it in place, but also provide more security than mortise cylinders (since it will take more force to unscrew or wrench it off).

The cylinder contains a set of pins, which if not aligned properly, prevent the lock from opening. These pins  are aligned properly only when the correct key is inserted. The key has a series of grooves (also called millings) on its sides, and as it slides inside the plug (Center of the cylinder), the horizontal grooves align with grooves(also called broachings) in the keyway, which then denies or allows access to the cylinder. The key’s blade has pointed notches and teeth, called bittings, which move the pins up and down till they are in line with the shear line of the  plug and outer cylinder, (the shear line is where the inner cylinder  ends and the outer cylinder (the housing) begins) allowing the cylinder to rotate freely and the lock to open.

So,  in summary, the keyway is the shape of the inside of the plug which allows(or doesnt allow)the key to be inserted)